Lucy & the value of vulnerability

Lucy shares with us what it felt like to share her experience of psychosis with the community.

“When I first found myself in a place where I could say ‘I feel recovered’ I had a strong gut feeling I guess more than anything to help other people that were in my position, or a similar position.

In a way, it was to help close the gap of isolation between people because everyone is encouraged to flaunt their perfections, but that’s not really what we are. I guess it’s more like closing the gap of being separated from one another and thinking that we’re all so different when we all share these same sort of challenges, idiosyncracies, and weaknesses, I guess.

The actual process of creating it was mostly just really fun. I felt better once I’d tried to articulate something that is almost impossible to put into words.

Honestly, it was easy in one way and hard in others, because you’re trying to relive an experience but you’re not really sure which parts of it actually happened.

Because by nature psychosis is confusing, so in trying to go back into that place you’re sort of wondering which of these parts were real? Which parts of this is going to matter that I tell the audience? I think because I’d worked through it I was ready to tell the story.

If I had have tried to tell my story and I wasn’t ready, going back into that place would probably be quite scary and confronting.

What helped me feel ready to share was actually through meditation and also learning that just because you’ve had that experience that doesn’t define you, it’s not who you are.

I think we find value in hearing the lived experience, probably because it’s not preachy, it’s just a unique experience.

It’s not coming out of a textbook, it hasn’t been taught in uni’s for centuries, I think it’s just more honest and transparent and people value vulnerability.

I think the first step to vulnerability is the acceptance that it might be a difficult thing, but knowing & hoping that it’ll be ok at the end.

You just sort of dive into that awkward space I guess and see what happens. I think it’s about knowing that you’re trying to help yourself in a positive way, so in order to do that you have to be uncomfortable at times.

When I first posted it to Facebook, it was actually terrifying because I still hadn’t told some of my best friends, some family members or even my boss at work because I felt like they didn’t need to know.

But in that there was also fear around what kind of response I’d get, like would people be mad at me? That critical voice that just jumps into your head.

I also thought someone else who had experienced psychosis might be offended by it, It was the fear of not wanting to upset anyone I guess.

You’re putting yourself out there, not wanting to hurt anyone.

In the end, it was a lot more positive – it felt like positive feedback and very supportive and thankful. Like, a lot of people expressed their gratitude for posting.

It was definitely worth it, and I know it was the right thing to do. 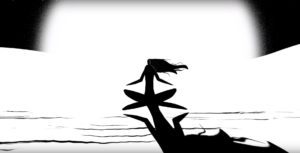